According to legal theory, legislators can design provisions on a two-ended spectrum ranging from specific norms to generic norms. The more specific a norm, thus the more clearly described it definitions, the clearer its applicability and effect. The opposite goes for general norms. As a result, legal certainy increases with a norm’s specificity, but so does opportunity to avoid its reach.

Under the OECD’s captaincy, the global focus in tax legislation has increasingly become to combat ‘agressive’ tax planning and to prevent what’s been summarized as ‘base erosion and profit shifting’. With that main target in mind, legislators over the last few years have commited to and chosen for a broad array of new anti abuse measures, most of which are of a general nature, thus designed to contain open norms. Therefore, corporations are increasingly confronted with legal uncertainty about the tax consequences of their business activities, financing and structuring. According to the OECD:

45. Why does the report propose different anti-abuse rules?
Treaty abuse, like the abuse of domestic law, can be addressed through a combination of (i) specific anti-abuse rules, which provide greater certainty but can only deal with known abusive strategies, and (ii) general anti-abuse rules or judicial doctrines, which are less certain but offer protection against abusive transactions that have not previously been identified or addressed. Both of these approaches can be equally effective to address treaty abuse, but countries have different legal environments and policy preferences. Therefore, while the minimum standard guarantees that treaty abuse is targeted effectively, countries have some flexibility in deciding which rules to adopt.
[OECD/G20 Base Erosion and Profit Shifting Project, 2015 Final Reports, Frequently Asked Questions]

The Netherlands has adopted one such General Anti-Abuse Rules by means of the ‘Main Purpose Test’ laid down in the Dutch Dividend Withholding Tax Act (art. 4.3.c DWT). This provision revokes the otherwise applicable withholding tax exemption on Dutch dividends paid to ≥5% parent entities in Treaty States if said entity has, briefly put, been ‘artifically interposed with the or one of the main objectives being to avoid taxation’. As explained by the Dutch legislator:

As per the proposed anti-abuse measure, abuse is identifief if –in short- the shares in the Dutch entity are held with the main aim or one of the main aims to avoid dividend withholding tax (the subjective test) and the shareholding construction or transaction is artificial (objective test). [The subjective test involves] making a comparison between the situation where the direct shareholder owns the shares and the situation where the indirect substantial shareholder were to own them. If the situation absent the interposition of the direct shareholder does not lead to a higher Dutch withholding tax claim, no tax avoiding aim is identified. […] If it does, however, it should be established whether the construction or transaction is of an artificial nature [which is considered the case if] it hasn’t been set up based on business reasons that reflect economic reality. [Explanatory Memorandum, Parliament, political year 2017–2018, 34 788, nr. 3].

As the norms set out above are broad and open, subjected taxpayers may seek out advance certainty on their applicability. But in order to avoid individual favorable treatment (and with that: the risk of state aid), said centainty requires a thourough investigation of the underlying facts and subsequently a uniform explanation and application of the tested norms. To warranty that, the Netherlands has introduced a new and reinforced advance certainty process as per July 1st, 2019. Rulings on international situations can only be obtained for cases absent agressive hallmarks, and are placed under central execution of the ‘Committee for International Fiscal Affairs’. This routing facilitates uniformity in the factual analysis and technical applications, mitigating State Aid risks and international allegations of ‘aiding and abiding’ agressive tax planning. [Click here to view the Senate’s Annual Review of the issued international rulings].

Executive summary: the Dutch dividends are distributed via an intermediate holding entity in a treaty state, to an ultimate beneficiary entity situated also in a treaty state. The direct payment would already be exempt under the domestic DWHT exemption so the ‘interposition’ cannot be tax motivated. As the subjective test therefore doesn’t apply, the materiality of the intermediate entity requires no analysis and the MPT does not revoke the exemption. It is therefore ruled that the exemption applies, to dividends reflecting these same conditions, for the next 5 years. 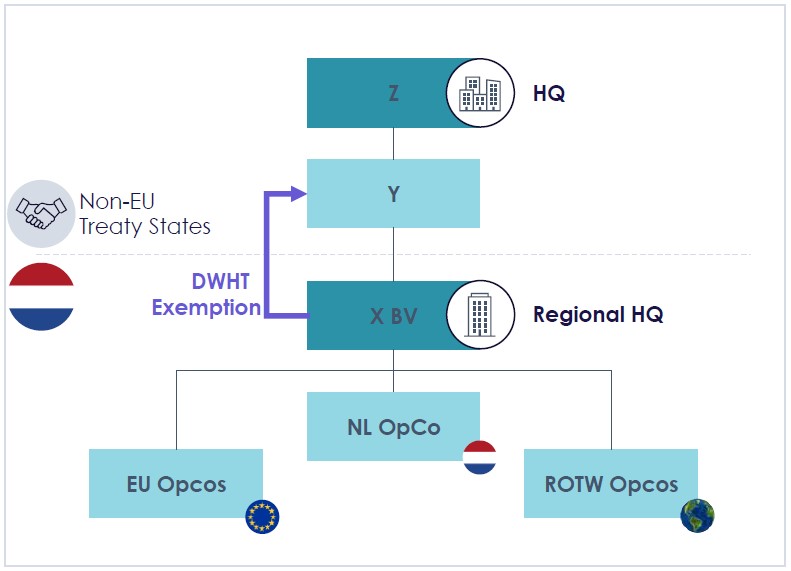 Want more information on the novel Dutch ATR Regime? Feel free to contact us! Also, register for our free webinar on this subject on November 27th via this link!